Our Head Start Annual Report is hot off the presses. Take a look!

Vermont Everyone Eats is in the news! Check it out!

The Valley News reports on the soon to be released VT Everyone Eats initiative, https://www.vnews.com/Vermont-program-aims-to-feed-people-and-support-restaurants-and-farms-35324818 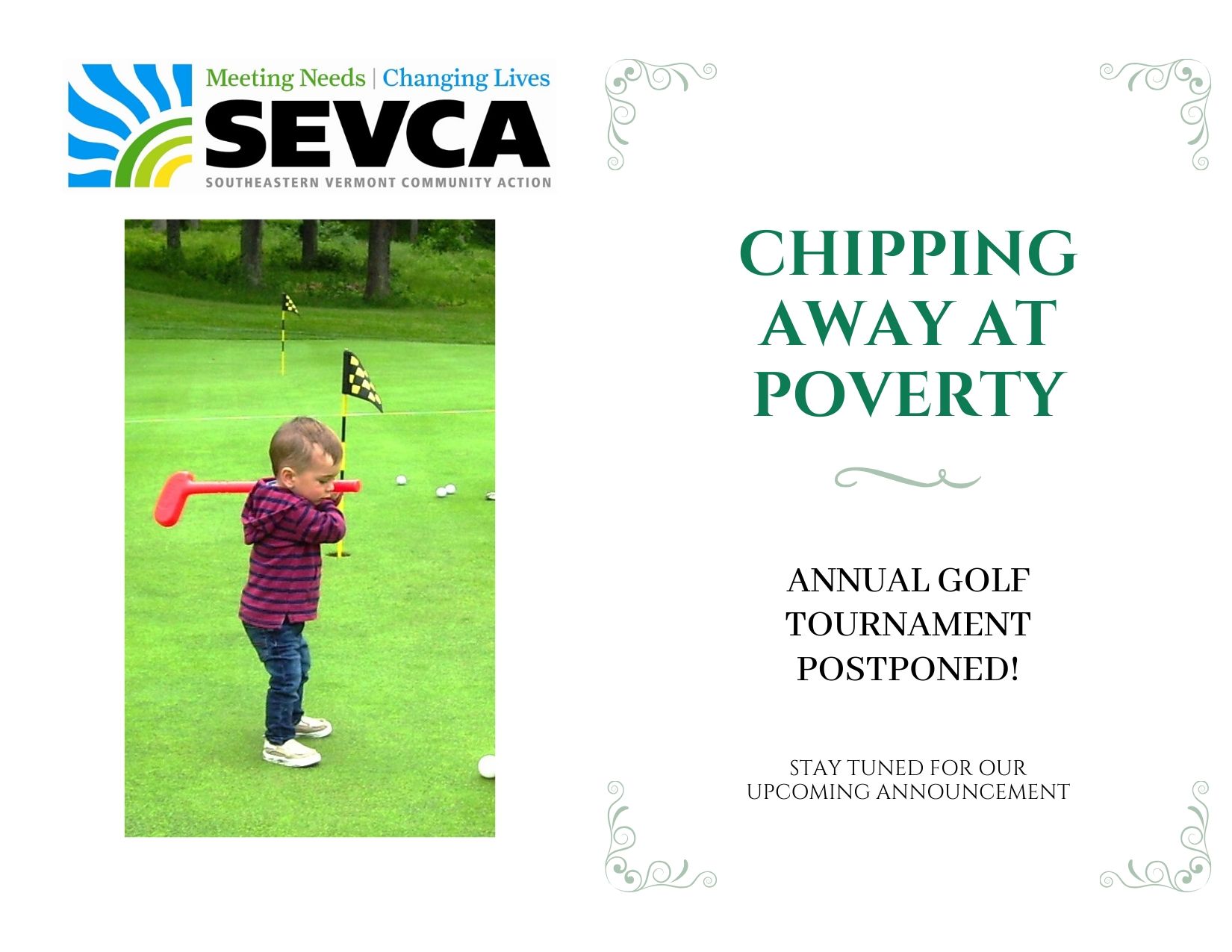 SEVCA's "Chipping Away At Poverty" Annual Golf Tournament Has Been Postponed until next year due to COVID-19.

We appreciate the ongoing community support for this event and we look forward to seeing you on the course soon.

If you are interested in supporting our efforts at this time, please consider a donation, https://www.givegab.com/nonprofits/southeastern-vermont-community-action-sevca

Our world, and most of all, our nation, has been shaken to its core by a Global Pandemic on a scale that we’ve only ever seen once before, and that over a century ago.  Already, COVID-19 has infected over 1.8 million Americans and taken more than 105,000 American lives.  We deeply mourn for all those who have died and feel the pain and hardship of so many more whose lives have been forever impacted by this crisis; in many cases unnecessarily, due to the unpardonable failure to take the required action to slow the spread of this deadly disease.  In an incredibly short time, the pandemic has altered everyone’s reality and none of us will ever be the same. But while it has upended almost everyone’s life in every corner of our country, the level of impact it’s had on different racial, ethnic and socioeconomic groups and communities has been profoundly unequal.

While the coronavirus has unleashed its hazard on the health and economy of our nation, it has also revealed a pre-existing condition that places all of us at greater risk: The disparity of human value – more specifically racism – has served as a catalyst that disproportionately heightened the infection, the disease, and the death of certain segments of the population; namely, people of color, who are also disproportionately people with low incomes living in places that were already in distress and suffering great physical, economic, and social harm.  This most notably includes Hispanics, numerous Native American tribes, and more than anyone, African Americans. In 32 states plus Wash. D.C., blacks are dying at rates higher than their proportion of the population. In 21 states, it's substantially higher, more than 50% above what would be expected. In four states, the rate is three or more times greater.  Nationally, the latest overall COVID-19 mortality rate for black Americans is 2.4 times the rate for whites; or looked at another way, if they had died of COVID-19 at the same rate as whites, about 13,000 blacks would still be alive.

And if that weren’t bad enough, African Americans are also being murdered at substantially higher rates than any other group, most shockingly by the people who are supposed to be protecting them from harm – the police themselves. Nationally, blacks comprise 13.4% of the population but 23.4% of the victims of reported fatal police shootings. Blacks are 2.5 times as likely as whites to be shot and killed by police. In twenty states it’s more than 3 times as likely, and in two states as high as 9 times as likely. So how can anyone be shocked at or fault the bitter outrage pouring from communities all around the country over the most recent notorious death of a defenseless black man – George Floyd in Minneapolis. This senseless murder just broke the dam holding back the ever-rising level of fear and anger and uprisings in African American communities over the last 70 years.  And that doesn’t even take into consideration the countless number of black men and women who have been murdered in the streets by self-appointed vigilantes. Anyone not moved to take to the streets is just not paying attention.

This must end, and it must end now!

During this trying time, especially given the racially charged events that have played out in recent weeks and months, it’s crucial to draw a line.  Murders of African Americans, attacks on Asian American-owned businesses, increasing numbers of murdered and missing Native American women and girls, and the marginalization, displacement, separation and incarceration of Hispanic and other immigrants seeking refuge weigh on our already-weakened hearts.  Many Americans distressed by these developments want to reach out and take action in ways that help them feel like they’re making a difference.  While many, with good intent, have engaged in social media activism in response to these atrocities, we are calling on everyone to move beyond the keystrokes of media devices and to do more. It’s not enough to voice safe support from a distance for undefined abstractions like equality, “color blindness” and “all lives matter.”  We must venture out further, into constructive anti-racist action that might even require us to sacrifice the advantages and privilege that many of us enjoy. Racism Must End! And it will only end if a critical mass of white Americans decides it’s important enough to discomfort ourselves to call it out, stand up to it, and join the fight to end it.

Currently there is no immediate treatment to cure and no vaccine to prevent the health pandemic or the social pandemic. While we are one human family, if ignored or inflamed, both conditions will separate, weaken and dehumanize us.  During this time of overlapping crises, Southeastern Vermont Community Action (SEVCA) – and the national Community Action network we’re part of – affirms that our healing as a nation is tied to strengthening our connections as family members, neighbors, co-workers, communities, and to our common humanity.

SEVCA’s values “recognize that inequitable systems and policies perpetuate and concentrate poverty in a discriminatory manner based on race, gender, disability, and other targets of prejudice;” and commit us to “promoting greater equity through changes in institutions, policies, and practices at all levels of society” and to “treat each person we serve with respect and compassion and to build relationships of trust with them.” These are foundational values that all of us should, and must, live by if we’re going have any chance of turning around the inequities and malice far too many of us have experienced for far too long.

With those values as our guide, we are dedicated to achieving a vision centered on respect and on the dignity, security, freedom from hardship, safety, health and well-being of everyone, and to creating solutions to end disparities and negative social determinants.  More than 55 years ago SEVCA and the 1,000+ Community Action Agencies nationally were born in the context of the civil rights movement, and in that spirit we will continue to denounce and fight against all acts of racism, brutality, oppression and dehumanization.

We invite, encourage, and urge everyone to join us in that commitment and that fight.  Really, what choice do we have if we want to continue to be the United States of America?

Waterbury, VT—On May 19, 2020, Vermont will become the latest state to pilot the use of SNAP food benefits to purchase food online. In Vermont, the SNAP program is called 3SquaresVT.

“This pilot gives people who get 3SquaresVT more options to put food on their tables, safely,” said DCF Commissioner Ken Schatz. “This is important during the current health crisis, especially for vulnerable Vermonters.  Some may be at higher risk for COVID-19; some may not have access to private transportation.”

For information about how it works, go to https://dcf.vermont.gov/benefits/EBT/online.

Contact your local SEVCA office for help signing up for 3Squares VT. Getting the help you need, now and always. Call us at 800-464-9951 and make an appointment today.

“If SEVCA hadn’t provided heat this winter, I might not be alive to write this.”